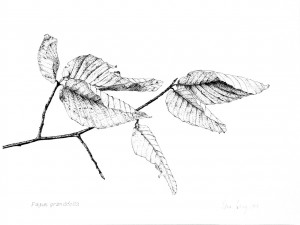 American beech (Fagus grandifolia) is an eastern North American forest tree that has a characteristic smooth, silvery gray bark that’s easy to spot, even from a distance. Beech is especially conspicuous after autumn leaf fall because its leaves persist on the tree through winter. Beech leaves first turn a rusty orange in autumn and fade to a light tan by winter’s end. The leaves make a pleasant rustling sound when stirred by a winter breeze.

Beech reproduces vegetatively by sending up sprouts along its wide-spreading surface root system, sometimes forming groves. Beech also reproduces by seed. The fruit is a soft-bristled, 4-part husk that matures in late summer and usually contains 2 triangular nuts. Beeches produce an abundant nut crop every 5 years or so, making a thick blanket of husks on the ground beneath the trees. Many mammals and birds relish the nuts. Before their extinction, passenger pigeons flocked in large numbers to beech groves to devour the nuts.

People and their livestock also have enjoyed beech nuts. Early farmers released their hogs into beech groves to fatten up on the nuts. Meat from these hogs had a unique flavor that was prized in local markets. The Beech Nut Company of upstate New York (now best known for its baby food) got its name from its 19th century origins as a maker of beech-nut-fattened smoked ham products.